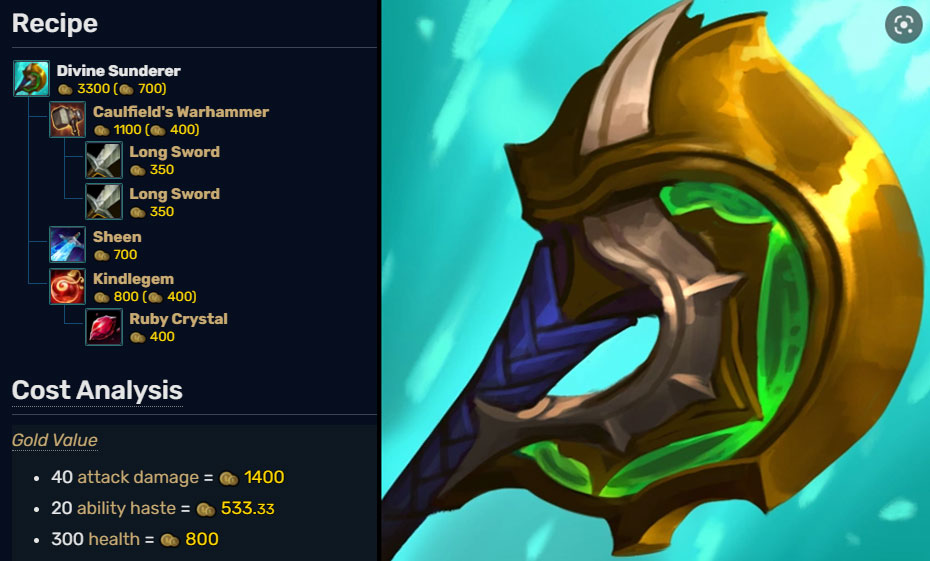 League of Legends Divine Ripper is Dominating patch 12.10 and that Riot has not balanced yet

It’s been a week since patch 12.10 hit League of Legends and Riot Games, and most players seem happy with the changes. Beyond champions, many items, runes, and summoner spells have seen their stats nerfed. However, it looks like an item has slipped through them all subtly but effectively. With this significant update, the studio’s goal was to increase overall champion durability (and nerf-related systems like healing, shields, and regeneration), mainly to slow down the pace of fights.

An oversight that will soon be fixed
After patch 12.10 was released, Riot Games released a micro-patch to balance some champions, but nothing new since then. Players later noted that one particular item hadn’t been changed and dominated the meta: the Divine Ripper. Due to a specific interaction, the item is wreaking havoc on Summoner’s Rift.

Divine Ripper
+40 AD
+300 HP
+20 skill speed
Enchanted Blade :
After using an ability, your next attack deals 12% (9% for ranged champions) of the target’s maximum health as bonus physical damage (1.5-second cooldown). If the target is a champion, you recover HP equal to 6% of the target’s total health (3% for ranged champions).
Mythic Passive :
All your Legendary items gain +5% Armor Penetration and +5% Magic Penetration.

This is partly because the item’s healing is applied before the mitigation, which means that Divine Ripper heals its wearer before using damage. So the assassin’s healing takes precedence over bleeding and bleeding effects, and the overall healing reduction that patch 12.10 brought has no impact on the item, which made it terrifyingly powerful.

So the community expressed their displeasure on Reddit (as usual), and a Riot Games employee replied, “All right, we really should fix this! We’re on it and should fix this very soon.” The rioter didn’t provide a date for these changes, but they probably won’t arrive until the next patch on 12.11.

While you wait for a fix, we can still abuse it as this is an oversight by Riot Games and not a bug. If you like Wukong, now is the time! The Monkey King currently has an indecent win rate of almost 54% at all ranks in the jungle, still equipped with the Divine Ripper.