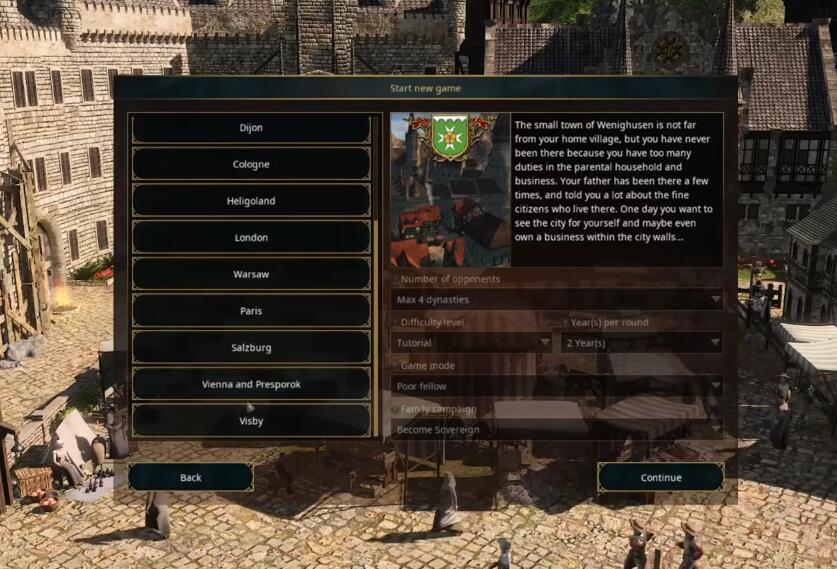 Dear players, it’s announced that The Guild 3 is (finally) here! And that can very well be described as a surprise when we remember the dark history of this hybrid role-playing game and economic simulation.

Announced back in 2014, developer Golem Labs launched an early access version so bug-ridden in September 2017 that every exterminator (and every player) quickly ran away. Publisher THQ Nordic had to act: While Golem Labs was sent on new adventures, replacement studio Purple Lamp was given the courageous task of saving the game.

Four years later, on June 14, 2022, the fully-fledged release, which was hardly considered possible, will take place. To do justice to the game despite all the events and fears, GameStar sent what is probably the fairest tester – namely, a completely blank slate in the guild universe, whose judgment could not be influenced by unresolved Early Access nightmares or even nostalgic comparisons with the predecessors.

And I’m telling you: The Guild 3 is complete and unique, bulky and unintentionally funny.

It suits you
You are looking for business games that you can immerse yourself in but can also be played very relaxedly.
Looking for an alternative to the usual medieval strategy games and want to wage wars on a neighborhood level.
Role-playing means more to you than slicing up monsters and pocketing loot.

It doesn’t suit you if…
We are looking for fast, well-thought-out business games with many variations.
Rimworld and Going Medieval spoil you.

The Sims in the Middle Ages, just different
Instead of ruling a kingdom from above like in other strategy games, my self-created character in The Guild 3 first must work hard for all of this and prevail against other AI or player families. For this, I alternately manage farm buildings and, at the same time, organize the everyday life of my future guild master.

And where does this steep path to power usually begin? Right, in the dirt, selling potatoes, berries, or iron, depending on what skills and line of business I initially chose.

Once enough capable people work for my business and the store begins to make a profit, it will be time to do something to build my dynasty and find a suitable marriage partner. And in the Middle Ages, everything went much faster than today!

After a few compliments, my character finds himself in front of the altar and afterward in bed to father the offspring, who can help diligently at the market a few in-game days later. Good boy, ambitious like his father!

After a few hours of play, I’ve risen through the ranks, own several well-established and thriving businesses, and hold a valuable seat on the City Council—one that competing families want me to vote for by the minute.

Incidentally, I hear that my son didn’t give a damn about the inheritance to now make a living as a thief two blocks away. Meanwhile, my daughter hasn’t had much luck finding a partner, and my wife wins a fight on the street for the fourth time.

Out of boredom, I start a feud with another family and kill their unguarded leader next to his home. When his successor steps onto the street the following day, he doesn’t change his face and greets me.

Lots of the hustle and bustle, little control, but laughter guaranteed
It’s not easy to rate The Guild 3 or say precisely how I feel when I play it. The Early Access nightmare is over (aside from people and carriages sometimes clipping together), but a masterpiece doesn’t emerge here either.

Rarely is The Guild 3 demanding. It is often very relaxing, sometimes dull, and apart from that, the whole time is unintentionally funny due to the many curious situations.

However – if you are looking for such role-playing economic simulations and very neighborly power struggles, you will not find an alternative. The guild, both the series and the third part, is unique but also uniquely special.

You can feel that, especially when looking at the gameplay areas in detail. Let me say this in advance: If you don’t want to watch the grass grow in the beautiful game world, you should play The Guild 3 at four times the speed since all processes take a long time and nothing else happens. That’s not to say you can’t keep track of all the popping-up messages and events at any speed.

The economic system is surprisingly complex at first glance, so newcomers should take advantage of the tutorial. Once you’ve mastered the initial struggle with the numbers and clicking in the menus, you’ll feel like the medieval Wolf of Wall Street and start improving and tinkering.

However, the area can also be ignored entirely at some point due to the many automated processes. The wealthy game character then looks desperately for work. Still, after the wedding, there is not much left for him to do besides motivational speeches and election campaigns – apart from the occasional purchase to climb the social ladder. And if he’s lucky, he might get sick and see the local doctor.

The entire life away from the economy takes place expediently and does not seem immersive because you are supposed to be closer to medieval events. Even the third-person perspective doesn’t change when I visit my character at home and can watch her wash with invisible water. The game world feels alive thanks to the many characters, events, and weather effects. Still, hardly anything affects the economy in the menus – or is difficult to follow.

The Guild 3 inspires the fantasy of being able to do anything, from buying up an entire city to overthrowing an opposing family. Still, when it comes to carrying out your plans, things get tricky.

How is it feasible, and is it possible at all? Mainly clever maneuvers rarely succeed or take an extremely long time. The best way is often to keep growing and eventually get elected supreme ruler.

My biggest hope is that multiplayer with dozens of other players will bring chaos and blood to the peace-joy-pancake skirmish. Since we hardly found any bold allies shortly before the release, we could not check the multiplayer for you. In anticipation that the servers will probably not be stormed en masse for the release, we recommend that you arrange your matches with other players via the Die Guild 3 Discord or other platforms.

Conclusion
The Guild 3 is entertaining and relaxing oddly – and yet I still find myself making big plans and wondering how it will happen. But I keep realizing I’m not playing the game I think I’m playing.

There’s no natural alternative for what The Guild 3 offers, even if it doesn’t do it well. But my hunger for it is awakened. Many decisions, such as the automated economy, are more than questionable. Does the technical implementation fail? Why take control away from me when I want to influence such details? And why bring the overthrow of a hostile family so uncleverly over the stage?

Knowing that two developers worked on this game, I’m not surprised by this odd composition. The Early Access phase is over, but it doesn’t feel finished, i.e., perfected. Will it ever be? If so, I’m looking forward to a follow-up test.