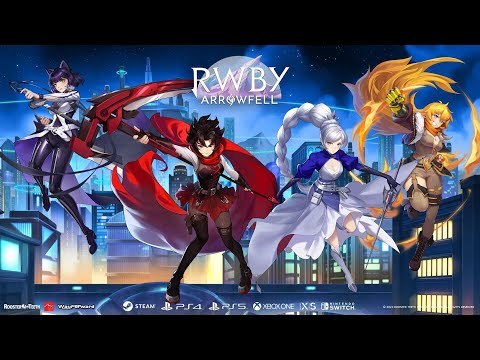 On July 2, the developer Wayforward released the latest trailer of the currently developed action game Rwby: Arrowfell and announced further details of this work.

This work is a game of the popular 3DCG anime series RWBY. The protagonists are Ruby Rose, Wis Schnie, Break Belladonna, and Yang Shaolon, who are enrolled in the Hunter Training School Beacon Academy. In this work, there is a terrible monster called Grimm, which brings death and destruction. Human hopes are left to the hands of hunters with paranormal abilities.

RWBY: Arrowfell depicts the story immediately after the anime version of Volume 7, which is officially qualified as a hunter. Team RWBY will get clues to the mysterious new threat while challenging the mission. The scenario of this work is handled by the anime version of the writer, and not only enemies that appeared in the original, but also new enemies of the original work will appear.

This work is a single play action game with a side view as a gameplay. Proceed on a stage where locations such as Atlas and mantles are expressed, and fight against enemies such as Grimm. Players can freely switch between Team RWBY. Ruby is a scythnia and a gun that transforms into a gun, Wais is Mirthen aster in Rapia, Break is a sword gumball shroud, and Yang is a gauntlet’s Ember Celica, each of which is a unique weapon of the original. ing. It is said that you can enjoy stylish actions just like the original.

Team RWBY also has the special abilities of Sembrance. Ruby’s petal burst can dash a long distance and dodge enemy attacks. Wisel griffs are the ability to create a scaffold in the air, and can attack with fragments by destroying the scaffold. The shadow of the break is an alter ego ability. And Yang’s Burn punches the ground, damages the enemy, and destroys obstacles.

Puzzle elements are also provided in the stage, and it is necessary to make full use of these Senblance. In the gameplay video released this time, there are scenes where multiple floor switches are pressed at the same time using a break shadow using a break shadow. By the way, the alter ego is also possible to attack.

Each character also has an upgrade element. It consumes the acquired skill points and allocates each status for each character. There are items related to melee attacks, long-range attacks, defense power, and energy recovery, and the video has increased the damage of Yang’s melee attack. Also, upgrading seems to be enhanced at the same time.

In addition, in the cut scene of this work, ROOSTER TEETH, which works on the animation version, includes a completely original 3DCG animation. In the game, in addition to the original characters such as General Ironwood, Ace Operital, Penny and Winter, a new hunter team called Team BRIR will appear.

RWBY: Arrowfell will be released in the fall of 2022 for PC/PS4/PS5/Xbox One/Xbox Series X | S/Nintendo Switch. In Japan, Ark System Works is in charge of sales.